How is jewellery made? Casting

Have you ever wondered how jewellery is made?  Almost any piece of precious metal jewellery comes to life by being either ’fabricated’ or ‘cast’. Let me tell you about casting!

Any piece of jewellery begins as the concept of the artist, either on their own, or in consultation with a client – long before it is a wearable piece. From the first conversations and ideas sketches arise on paper or in the form of mock-ups. Since thorough design requires a great amount of training, deliberation, and time, many artisans will charge a fee at some point during the design phase.

Once the concept is finished and approved, any ‘cast’ jewellery creations generally start in wax and are later cast in precious metal. 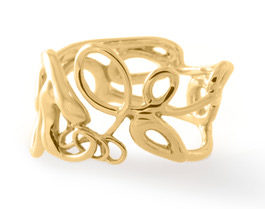 The journey of the piece varies according to the complexity and type of design in question, and with the expertise and resources of the maker. Traditionally, and still often today, the artisan will carve the piece in wax with a variety of hand tools. Jewellery has been made in this way for millennia (since 4000 BC).

Another method of working with wax is to liquefy the wax, and almost ‘paint’ with the wax.

Alternatively, imprints can be made, such as that of a leaf, and the texture will be replicated exactly in the finished piece (photo of mapleWrap wax)

A more modern method, appropriate for pieces with more graphic content or lettering, is 3D modelling and printing. This sounds very much easier than it actually is – great computer skills are required in order to create a piece in 3D software. The 3D design file created is then milled on a CNC machine, or ‘printed’ by means of a 3D printer.

If there are to be a number of identical pieces, a master may be created, of which a mold would be made. This mold is then wax-injected to create multiple identical wax pieces for casting.

With any of these methods, a wax piece will then always have to go through the following steps: 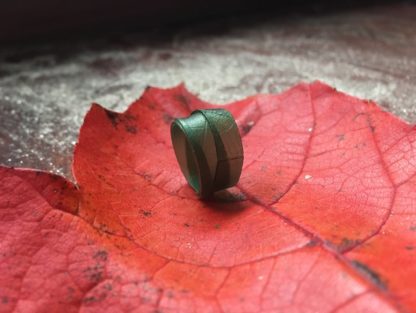 The finished cast still requires much clean up by hand – filing, sanding, and polishing.  A precious gem setting may be added at this point, after which the piece will be polished again, followed by meticulous cleaning. 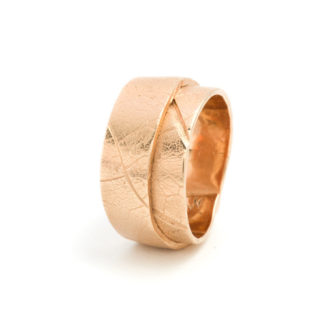 Your goldsmith (hopefully me!) will know whether casting is the right method for the custom project you have in mind. In another article, I will tell you about ‘fabrication’, a completely different way of making jewellery.